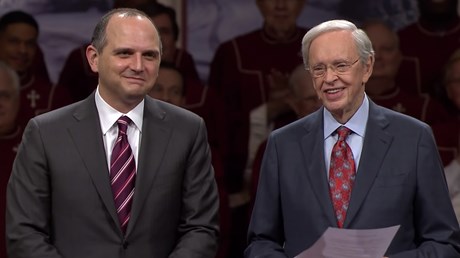 In a video announcement following the online service at First Baptist Church in Atlanta on Sunday, longtime pastor Charles Stanley announced his transition to pastor emeritus.

Stanley, who came to First Baptist as an associate pastor in 1969 before being named pastor two years later, informed the church’s board earlier this month of the decision.

“I’m so grateful [God] saw fit to allow me to serve as your pastor for more than 50 years,” he said. “As much as I love being your pastor, I know in my heart this season has come to an end.”

Stanley explained he isn’t retiring, but will focus his energies on In Touch Ministries, which he founded in 1977.

“As you know, I don’t believe in retirement. … I’ll continue to preach the gospel as long as God allows,” he added. “My goal remains the same—to get the truth of the gospel to as many people as possible as quickly as possible in the power of the Holy Spirit to the glory of God.”

[Editor’s note: Stanley said the same in a 2016 interview with CT. “I just to want to be used to the maximum of my potential through the last day of my life,” he said. “I can’t even see myself retiring because I have a message, and I can’t wait to tell it to the whole world.”]

Anthony George will transition from his position of associate pastor, which he accepted in 2012, to senior pastor. In 2017, the church announced a succession plan for Stanley, George, and First Baptist’s pastorate.

He followed Stanley’s comments in the video with some of his own. “Thank you for being strong and of good courage through every battle that you’ve …